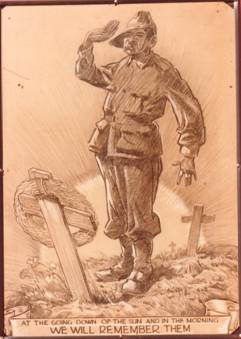 “They shall grow not old, as we that are left grow old;
Age shall not weary them, nor the years condemn.
At the going down of the sun and in the morning
We will remember them.”

The Ode is taken from the eulogy For The Fallen, by English poet and writer Laurence Binyon and was published in London in The Winnowing Fan; Poems of the Great War in 1914.

The fourth verse, which became the League Ode, was already used in association with commemoration services in Australia in 1921 and not only adorns War Memorials throughout the British Commonwealth but is at the heart of all rites of the RSL.

The badge is a symbol of a readiness at all times to render service to Crown and country, and to former comrades. It is a time-honoured emblem – one that has been worn with a deep sense of pride by the most revered in our land and one that glorifies all privileged to wear it.

Neither wealth, nor influence, nor social standing can purchase the badge, which may be worn in honour only by those who have rendered service in the armed forces of the Crown or its allies.

The wattle is symbolic of Australia. The leek, rose, thistle and shamrock are symbolic of and represent the link with Wales, England, Scotland and Ireland respectively.

In the badge the red represents the blood tie of war that exists between comrades. White stands for the purity of motives in joining the League – to render service without thought of personal gain or ambition. The blue indicates a willingness to render that service to a comrade anywhere under the blue sky – wherever he or she may be.

Depicted in the centre of the badge, and encircled by the name of the organisation, are a sailor, soldier, airman and servicewoman marching together with their arms linked in friendship. This is to show that within the circle of the League, all Services and all ranks march together in unity and comradeship.

We would ask that you look upon your badge as an inspiration to good citizenship, cherishing it as a symbol of all that is best in our national life and living up to the high ideals on which the organisation is based.

The motto of the RSL has an interesting history.

In the fourth century BC Demosthenes enunciated the spirit of the motto although he used these words:

“There is one safeguard known generally to the wise,
which is an advantage and security to all,
but especially to democracies as against despots. What is it? Distrust”

In 1770 the following words were apparently first used by John Philpot Curran in his speech upon his election as Lord Mayor of Dublin:

“The condition upon which God hath given liberty to man is eternal vigilance.”

Then Wendel Phillips, in an address before the Massachusetts Anti Slavery Society in 1852 said:

“Eternal vigilance is the price of liberty”

Some people have attributed this also to Thomas Jefferson but no one has found any records of Jefferson using the sentence.

Our Flag bears the stars that blaze at night.
in our southern skies of blue;
And that little old Flag in the corner,
that’s part of our heritage, too.
It’s for the English, the Scots and the Irish,
who were sent to the ends of the earth;
The rogues and the schemers, the doers and dreamers;
who gave our Australia birth.
And you who are seeking to change it,
you don’t seem to understand;
It’s the Flag of our law and our language,
not the Flag of a faraway land.
There are plenty of people who’ll tell you
that when Europe was plunged into night,
That little old Flag in the corner
was their symbol of freedom and light.
It’s not that we owe allegiance
to a forgotten imperial dream:
We’ve the stars to show where we’re going;
that old Flag to show where we’ve been.
It’s only a piece of old bunting
It’s only a coloured old rag
But there are thousands who died for it’s honour
and shed their best blood for our flag

Australians all let us rejoice,
For we are young and free
We’ve golden soil and wealth for toil,
Our home is girt by sea
Our land abounds in nature’s gifts
Of beauty rich and rare;
In history’s page let every stage
Advance Australia Fair
In joyful strains then let us sing
Advance Australia Fair

Australians all let us rejoice,
For we are one and free
We’ve golden soil and wealth for toil,
Our home is girt by sea
Our land abounds in nature’s gifts
Of beauty rich and rare;
In history’s page let every stage
Advance Australia Fair
In joyful strains then let us sing
Advance Australia Fair